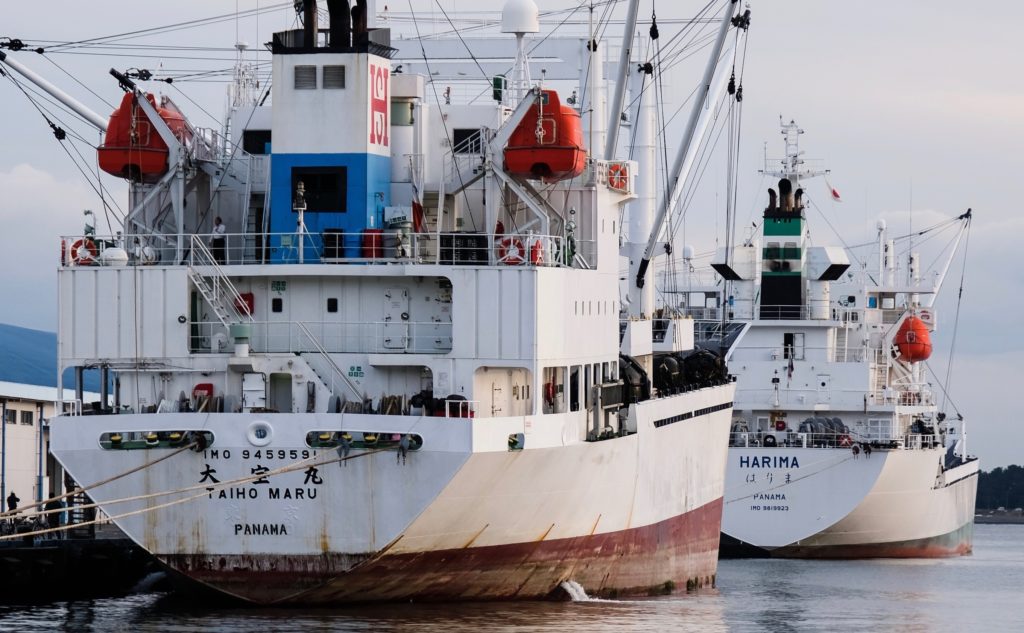 Transshipment at sea, the transfer of catch from fishing vessel to carrier vessel on the open ocean, allows the former to continue operating in their fishing grounds for a year or more without returning to port.

It’s a system integral to the distant-water fishing industry, but experts say it also puts crew at greater risk of abuse.

Risk became reality on board distant water tuna fishing vessels belonging to Chinese company Dalian Ocean Fishing (DOF), which supplied tuna to Mitsubishi Corporation subsidiary Toyo Reizo. Forced to work punishing hours and often without access to decent food or water, at least 10 crew, many of them young Indonesians, died in 2019 and 2020 alone.

Former crew interviewed by our reporting partner Mongabay spoke of staying at sea for over a year at a time, periodically transferring their catch to refrigerated cargo ships, also known as reefers.

Even when crew became seriously ill, DOF vessels sometimes neglected to return to port to provide the ailing men with medical care. In other cases, delayed responses meant that crew passed away on the way to shore or soon after being admitted to hospital.

Distant water tuna fishing vessel owners say their business wouldn’t survive without transshipment. If banning the practice isn’t realistic, how can vulnerable crew be protected from abuse at sea?

Attempted escape to a reefer

Like most distant-water tuna fleets, transshipment at sea was standard practice for DOF.

After a vessel filled its freezers with tuna, a reefer would meet it at sea to take the catch to market. Former crew recall transferring up to 50 tons of tuna at a time. Transshipments occurred roughly every three months, allowing DOF vessels to stay in their fishing grounds for over a year at a time. Some crew never saw land for the entirety of their two-year contracts.

Far from watchful eyes and without access to working phones or internet, crew on multiple DOF vessels report being subjected to violence and threats from senior crew, expired food and distilled seawater that “smelled of rust,” and a minimum of 16 to 18 hours of work per day.

Rusnata (39), an Indonesian who worked on the Long Xing 607 in the Pacific Ocean from November 2018 to October 2020, says a few of his fellow crew decided they would rather break contract and go home rather than stay on board any longer. But the captain refused to take them to port.

Then, one day, a reefer appeared to pick up the tuna the Long Xing 607 had caught.

In a report released after deaths on board DOF’s fleet first came to light, Japanese nonprofit Human Rights Now wrote that transshipment at sea “enables vessels to go for long periods without returning to port, resulting in crews being cut off from the outside world, making it difficult to monitor conditions on board, and potentially enabling violations of crew’s labor and human rights.”

Former Greenpeace Senior Oceans Adviser Andy Shen is of a similar opinion (the interview was conducted while Shen was still with Greenpeace).

“Fishing vessels staying at sea for months or even years on end is a major risk factor, because there’s no one watching out for the crews, and no way for them to leave. 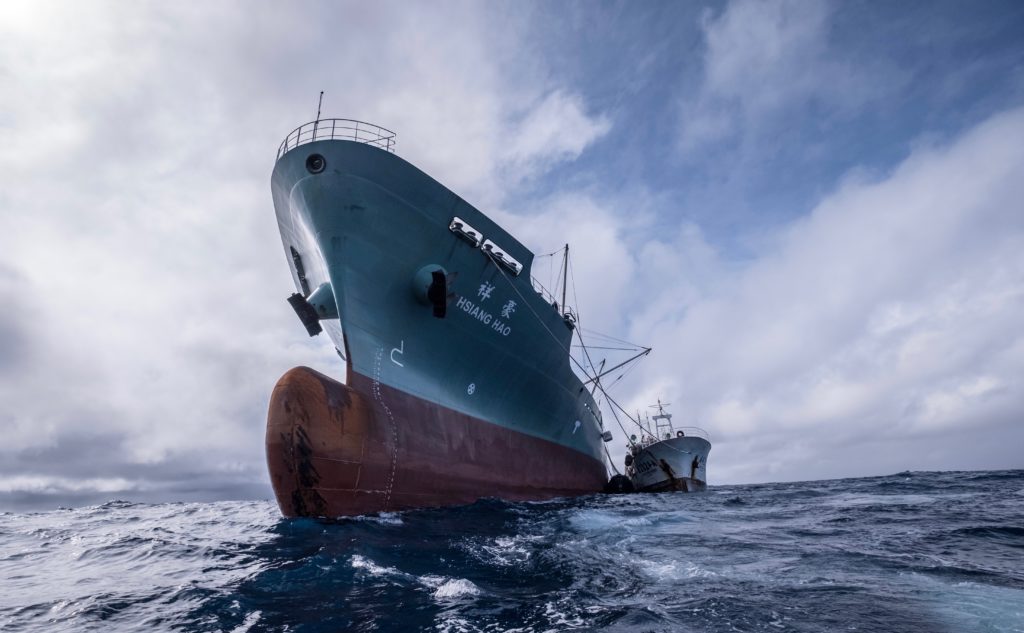 Frozen tuna are transferred from a Taiwanese longliner to the Hsiang Hao, a Panama-flagged reefer operating out of Japan, in the middle of the Atlantic Ocean. Photo courtesy of Greenpeace.

Japan: No import ban on products linked to forced labor

Located about 150 kilometers southwest of Tokyo, Shimizu port is Japan’s principal landing point for frozen tuna. Although in the past fishing vessels themselves would come to Shimizu to unload their catch, now an overwhelming majority of the tuna passing through the port is carried there by reefers, according to a local fishing and port promotion association.

By removing the need to return to land every time their freezer is full, reefers enable fishing vessels to save valuable time and fuel. As increased competition and overfishing deplete stocks, transshipment represents the difference between making a profit and going under for many fishing companies.

In Japan, tuna caught by both domestic and foreign fishing vessels is most often brought home by reefers. With three levels of freezers keeping tuna on ice at -60 degrees C, the 120-meter-long reefers are able to pick up literal boatloads of fish before heading to port.

Transshipment at sea is the business reality, but a reality with inherent risk. What can importing nations do to ensure their tuna hasn’t been tainted by forced labor or other abuses?

The U.S. provides one example. In May 2021, U.S. Customs and Border Protection banned the import of tuna caught by DOF “based on information that reasonably indicates the use of forced labor in the entity’s fishing operations.”

Tansa has found no indication that tuna caught by DOF entered the U.S. market. DOF’s main customers were in East Asia, first and foremost Japan.

Japan’s Fisheries Agency maintains detailed records of tuna imports, including the name of the relevant fishing vessel and reefer, through import declarations that must be submitted per fishing vessel. However, the country has yet to ban tuna linked with forced labor or other abuses.

Amid growing international concern over fisheries management, in October 2020 Japan adopted a new law enabling it to more strictly regulate seafood product distribution. However, the law is intended to combat illegal, unreported, and unregulated (IUU) fishing, rather than protect vulnerable crew.

“At this point in time, Japan does not have the same legal system in place as the U.S. to prohibit the import of goods manufactured by forced labor,” wrote Kohei Ito, deputy head in charge of resource management in the Fisheries Agency International Affairs Division, in an email to Tansa.

Some in Japan’s fishing industry argue that further reform is necessary.

In August 2021, an association aimed at getting younger generations involved in Japan’s tuna fishing industry requested that it’s umbrella organization, the Japan Tuna Fisheries Co-operative Association, petition the Fisheries Agency to get stricter checks for imported tuna included under the new law.

The person behind the initiative, Sotaro Usui, is a distant-water tuna fishing vessel owner himself. In addition to Japanese senior officers, Usui’s seven boats are crewed by Indonesians who earn roughly $1,000 per month. Unlike DOF, he provides his crew with internet access while they are on board so that they can contact their families and others in the outside world.

“I cried when I read about the deaths on the Longxing 629,” Usui says. “Without proper checks, Japan will continue importing tuna from fleets similar to DOF. Being able to ban fish caught by forced labor, like the systems in the U.S. or EU, would do a lot to address the problem.” 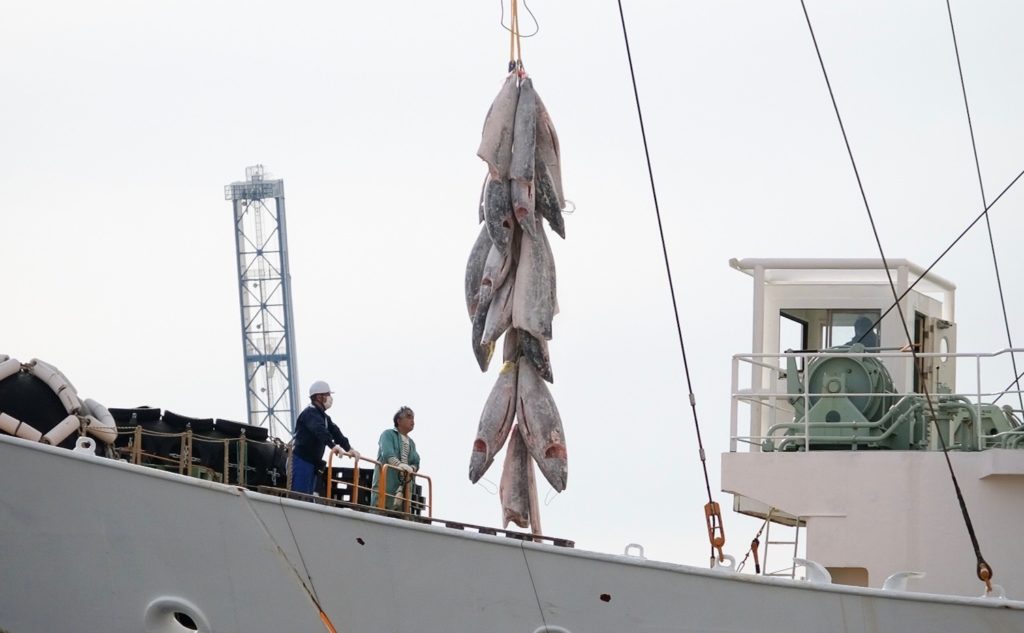 Frozen tuna unloaded from a reefer at Shimizu port. Photo taken on Jan. 26, 2021.

Consumers, vendors left in the dark

Compounding the Fisheries Agency’s lax approach to abuses in Japan’s tuna supply chain, consumers are also often left in the dark as to who caught their fish.

During a visit to the Yokohama Central Wholesale Market, Tansa learned that, when it comes to imported tuna, distributors like Toyo Reizo don’t inform vendors which fishing company caught the tuna they are selling.

“The only information we receive is the sea were it was caught, the flag of the reefer that brought it to Japan, the port where it was unloaded, and of course the distributor,” says an individual who works at the market.

On its website, Toyo Reizo explains how it maintains traceability for its tuna: “We gather product information from trusted suppliers, and each tuna is tracked with an individual barcode” — but this only applies to farmed tuna. The website says nothing about traceability for the wild tuna Toyo Reizo purchases, such as those caught by DOF.

Tansa asked the Mitsubishi Corporation PR office how tuna caught by DOF was made available to Japanese consumers.

“We are unable to provide answers regarding the content of individuals transactions,” the corporation responded, “as it would violate our confidentiality with our clients.”

“Death on Distant Water” is a collaborative investigation by Tansa, Mongabay, and the Environmental Reporting Collective. Interviews with former crew used in this article were conducted by Basten Gokkon of Mongabay.