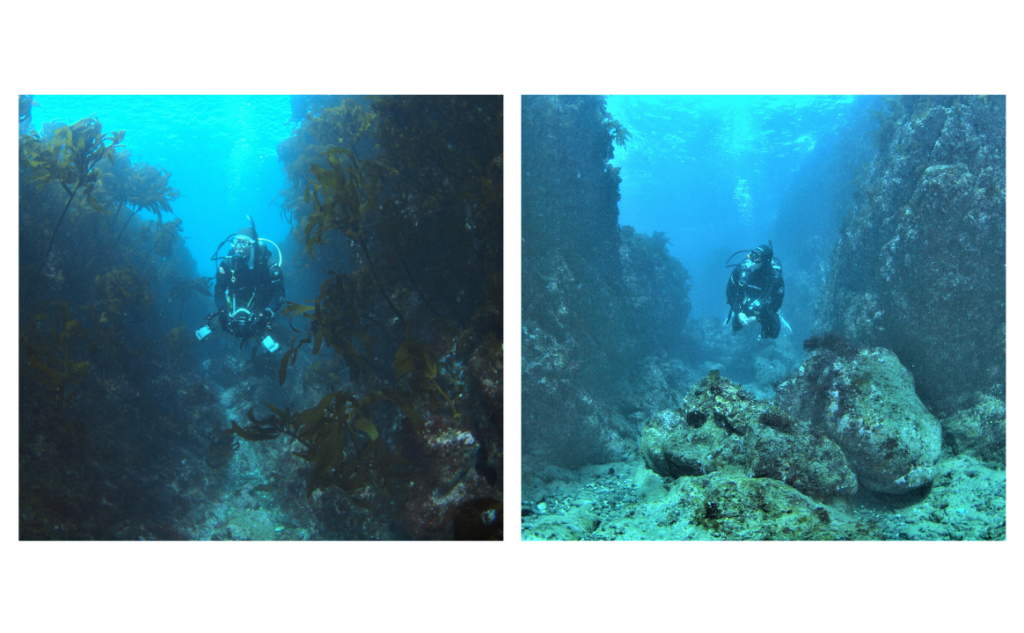 'Rocky shore denudation' believed to be caused by rising sea temperatures visible near Enoshima, on the opposite side of the Miura Peninsula from Yokosuka. The photo on the left was taken in March 2012, the right in March 2020. (C) Masahiro Takemoto

Residents of Yokosuka and nearby towns have sued the Japanese government to stop the construction of a large-scale coal-fired power plant in their area. Once it comes online in 2024, the plant will emit 7.26 million tons of CO2 per year.

Yokosuka, situated on the southwestern side of Tokyo Bay, is the hometown of Japan’s minister of the environment, Shinjiro Koizumi. However, Koizumi has refrained from trying to stop the new coal plant, in part because the Ministry of the Economy, Trade and Industry (METI), rather than the Ministry of the Environment, is in charge of setting Japan’s energy policies and approving its power plants.

Accordingly, it is METI that the Yokosuka residents have sued. They claim the coal plant will dangerously add to the climate crisis that is already impacting Japan — including Yokosuka.

At first, METI’s lawyers refused to acknowledge the plaintiffs’ climate-based arguments. They ignored data from METI’s own documents, as well as widely accepted climate science.

Although Japan’s politicians and electrical utilities claim to promote decarbonization, the Yokosuka lawsuit reveals the lengths METI will take to defend the country’s continued use of coal.

The Yokosuka plaintiff group comprises of 48 residents from Yokosuka, the city in which the coal plant is being built, and the surrounding area. They filed their suit against METI — demanding the ministry’s final approval of the plant’s environmental impact assessment be repealed — in May 2019 in the Tokyo District Court.

In addition to arguing that the environmental impact assessment falsely claimed to reduce CO2 and other emissions, the residents also say they will be harmed because the new plant will add to the climate crisis.

Japan is already suffering from flooding and landslides caused by heavy rains, increased rates of heat stroke due to hotter summers, and reduced marine resources as sea temperatures rise. As we continue to pump CO2 into the atmosphere, the repercussions will increase. 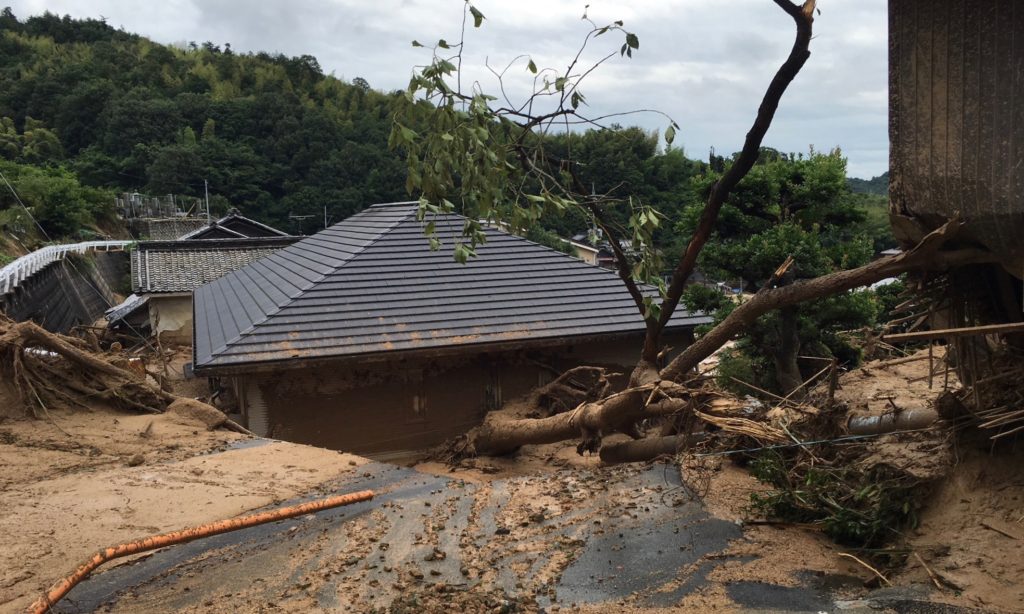 In fact, in some years the damage has been so severe that Japan stands out on a global scale. The nonprofit Germanwatch’s “Global Climate Risk Index” ranked Japan as the country which suffered the most from extreme weather events in 2018.

That summer, over 230 people lost their lives after torrential rains triggered landslides and flooding in western Japan. Heat waves, including temperatures a record 2.8 degrees C above average in eastern Japan, caused 1,581 deaths from heat stroke that year.

Yokosuka too is experiencing the impacts of the climate crisis.

One member of the plaintiff group, Masahiro Takemoto (65), started noticing a change in the surrounding sea roughly 20 years ago. A professional diver with 40 years of experience, Takemoto has seen the effects of rising sea temperatures up close.

Like many parts of Japan’s coast, Yokosuka and the surrounding areas are losing their marine plant life, a phenomenon called rocky shore denudation. Although various factors can cause sea plants to disappear, a study by a Kanagawa Prefecture marine research center linked sea temperature rise with rocky shore denudation observed around the Miura Peninsula, where Yokosuka is located. Sea urchins and herbivorous fish that thrive in warmer water have consumed the area’s seaweed until little is left.

As the seaweed disappears, so too do the fish and shellfish which feed on it and make it their home. Fishermen who are part of the Yokosuka plaintiff group also tell of reduced catches in recent years.

“People would be in an uproar if suddenly all the trees on the mountains died off, but the average person can’t see the changes happening underwater,” says Takemoto, who has observed damage to marine ecosystems due the climate crisis around Japan and overseas.

“It’s much too late to be building new coal plants: the CO2 they emit will only make this problem worse. The government and [Yokosuka power plant owner] JERA need to open their eyes.” 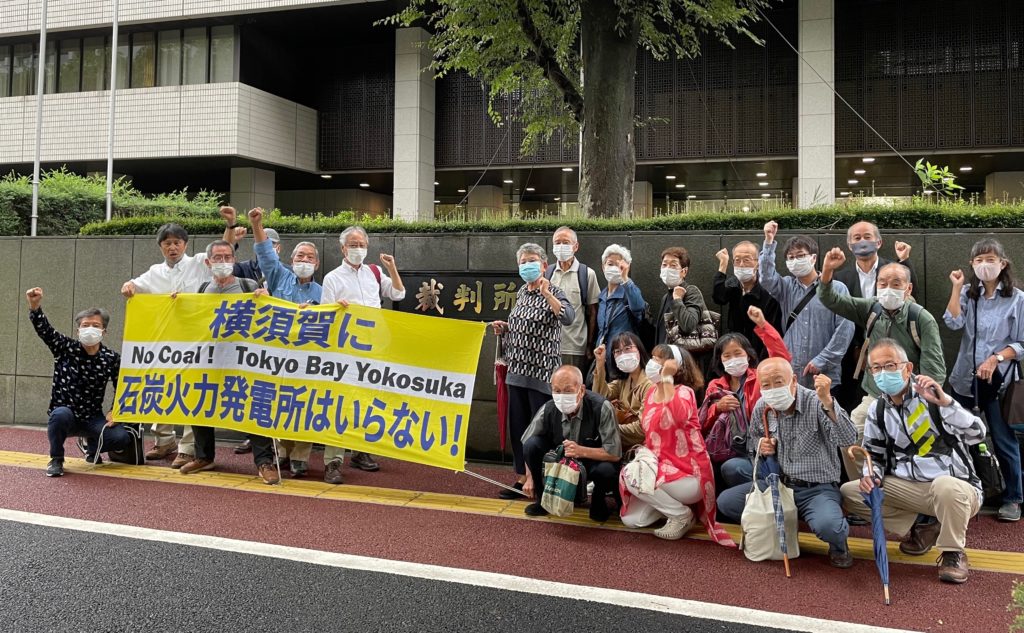 Members of the Yokosuka plaintiff group in front of the Tokyo District Court on Sept. 3, 2021

METI denied its own data

In their suit, the Yokosuka plaintiffs claim the coal plant’s environmental impact assessment did not give proper consideration to the potential harm caused by its CO2 emissions.

In their argument, the plaintiffs’ lawyers drew on various facts about emissions and power plants — some of which METI’s lawyers initially refused to acknowledge.

For example, a section of the plaintiffs’ complaint explaining the need to end reliance on coal power included the following: “Even the most efficient coal-fired power plants emit roughly twice the amount of CO2 as natural gas plants.”

At first, METI’s lawyers attempted to deny this.

As part of the suit’s legal proceedings, the defense had to go through the plaintiffs’ claims one by one and state if they acknowledge them, dispute them (whether on a factual or legal basis), or do not know enough to do either. In response to the sentence about CO2 emissions from coal versus natural gas, METI’s lawyers issued a denial without any supporting evidence.

At the Tokyo District Court on May 17, 2021, Torai Handa, a member of the plaintiffs’ legal team, presented the judge with an example of a past document in which METI itself had explicitly stated that coal power releases roughly twice the amount of CO2 as natural gas.

The document in question had been prepared by METI’s Agency for Natural Resources and Energy for a Basic Policy Subcommittee meeting on Nov. 20, 2015. According to meeting minutes, the then head of the agency’s Electricity and Gas Industry Department, Akihiro Tada (current METI vice-minister), had referred to the corresponding page of the document and noted that it “lays out the facts of CO2 emissions from coal” — that it emits twice as much CO2 as natural gas.

METI had denied its own data in court. 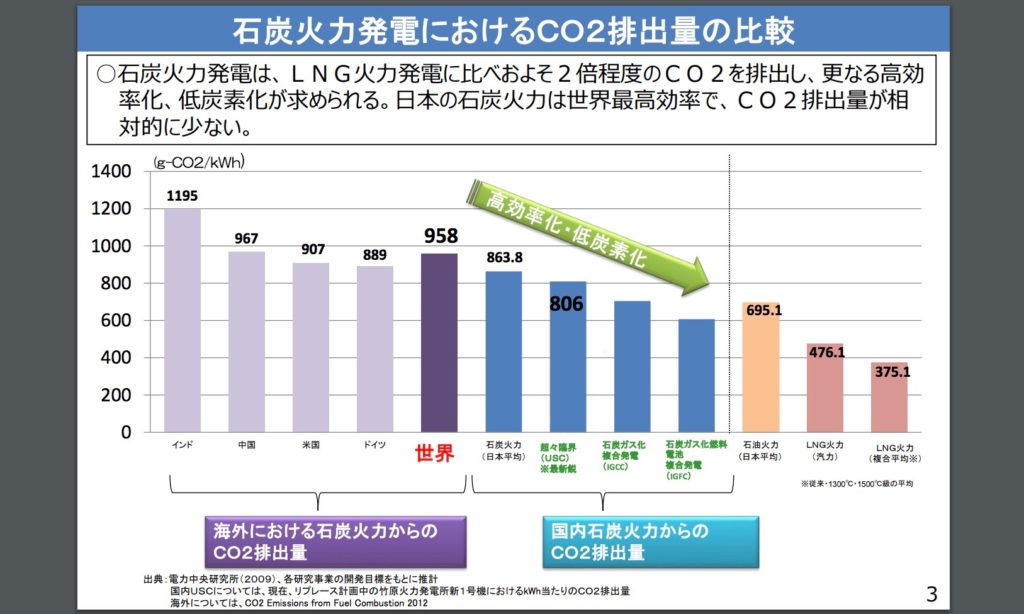 The lawyers didn’t stop there. In another section of their response, they claimed ignorance of near-universally acknowledged climate science.

In their complaint, the plaintiffs noted global average temperatures are now roughly 1 degree C higher than pre-industrial levels. Also recorded was the fact the concentration of CO2 in the atmosphere has risen from 278 ppm prior to the industrial revolution to 403 ppm in 2016. That data was sourced from Japan’s Meteorological Agency.

In response, METI’s lawyers acknowledged that such information was posted on the Meteorological Agency’s website. They refused, however, to acknowledge the veracity of the information. Instead, they took the third option open to them as part of their response; they simply claimed not to know enough to accept or reject, again without explanation.

“The defense’s response goes against the basic assumptions of the Paris Agreement and global warming countermeasures. It’s unbelievable that METI would not be able to confirm these facts with the Meteorological Agency.

“This attitude risks a loss of confidence in Japan from both international society and the Japanese public.”

In court on May 17, after the Yokosuka legal team objected to the defense’s attitude of willful ignorance, the judge ordered the defense to redo its responses.

On Sept. 3, METI’s lawyers submitted new responses to 11 points of the plaintiffs’ original complaint. This time, they acknowledged that coal emits about twice the amount of CO2 as natural gas and that Earth has warmed by roughly 1 degree C compared with pre-industrial levels. 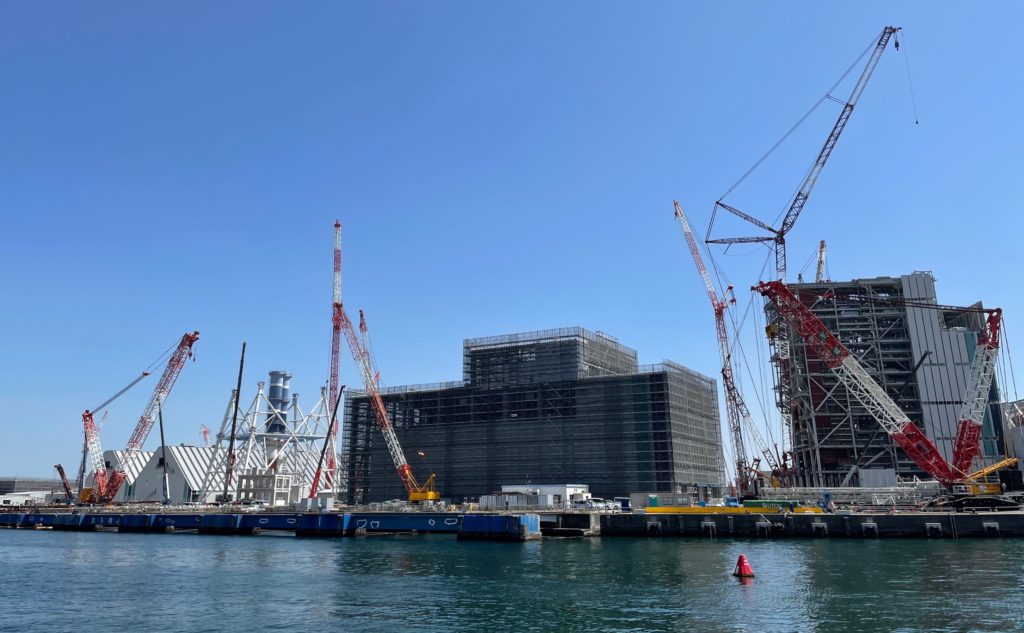 The new coal plant under construction in Yokosuka. Photo taken on April 19, 2021.

“The government is so sure they’re going to win, that’s why they have given such careless responses,” says Sayoko Iinuma (51), a member of the Yokosuka plaintiff group who lives in the neighboring city of Zushi. Her husband and teenage daughter are plaintiffs as well.

Despite her anger at the defense’s attitude, Iinuma says she is glad to be doing what she can by taking part in the lawsuit. “I feel it’s my responsibility as a parent to pass on a safe, healthy environment to the next generation.”

While Iinuma and the other plaintiffs are deeply concerned about the climate crisis, it appears unlikely METI feels the same sense of urgency, at least judging by these court proceedings.

Citing the ongoing lawsuit, both METI and its lawyers declined to comment when approached by Tansa.