The doctor separated from his patients (5) 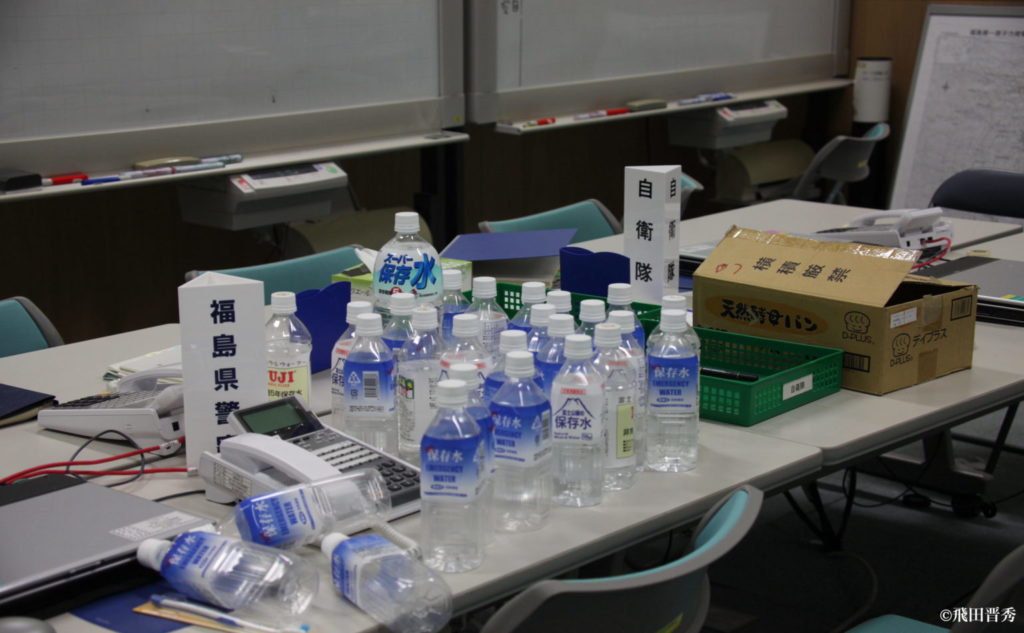 Meltdown. Leaving the evacuation of residents near Fukushima No. 1 still incomplete, responders retreated as the situation at the crippled nuclear plant worsened on March 14 and 15, 2011.

In their haste to put some distance between themselves and the radiation, members of the Self-Defense Forces left behind oil drums still full of fuel.

The offsite center, tasked with leading the local emergency response, also found themselves too close to the nuclear plant for comfort. They decided to relocate.

At Futaba Hospital, hospital director Ichiro Suzuki was persuaded by Futaba Deputy Police Chief Akimasa Nitta to temporarily leave his charges until it was safe to return.

Their group — comprised of four hospital staff and eight police officers, split between two police vehicles — made for Wariyama Tunnel, about 20 kilometers southwest of Fukushima No. 1. Distanced from the nuclear plant and with a roof of sorts over their heads, they hoped waiting at the tunnel would give them a measure of protection from radiation.

Suzuki, Nitta, and the others arrived at Wariyama Tunnel at 12 a.m. on March 15. In addition to its other benefits, they also guessed that any SDF rescuers headed to Futaba Hospital would pass along this road. Maybe they could flag them down and explain the situation at the hospital, which still housed 92 patients and three corpses.

Although Suzuki had replaced patients’ IVs right before leaving, they would need further care in the morning. It was imperative for the staff to return to the hospital as soon as possible.

But there was still no sign of the SDF.

“Are they on their way?” Nitta repeatedly asked the prefectural police’s disaster response headquarters via his transceiver. However, the answer was always the same.

Dawn came, and the 12 police and hospital staff were still waiting in their cars at the tunnel.

At 6:15 a.m. on March 15, they heard still more distressing news broadcast through the car radio.

“There’s been a hydrogen explosion at Fukushima No.1’s unit 4.”

The plant had six nuclear reactors in total. Now half had experienced explosions.

Not long after the news of the explosion, Nitta was contacted by the prefectural police’s disaster response headquarters on his transceiver: “Is it possible for the doctors to be on hand when patients are rescued?”

“Of course we’ll go,” Suzuki responded when Nitta told him the headquarters’ request.

Nitta once again reminded the prefectural police of their location, so that they could link up with the SDF when they arrived. “We’re on standby at Wariyama Tunnel, on prefectural route 36. Please have the SDF meet us here.”

It was the first time they had heard concrete information about the SDF’s movements since arriving at the tunnel seven hours earlier. Although it would take another two hours for the SDF to reach them, they were relieved that help was at last on the way.

But then another message from the prefectural police came through the transceiver: “Wariyama Tunnel is within 20 kilometers of Fukushima No. 1. Move outside the evacuation zone.”

Their refuge was untenable, by just a hairs breadth.

At 8 a.m., the group decided to head to the Kawauchi town hall, which lay along the same road as the tunnel. It should still be possible to link up with the SDF.

One of the police officers approached Suzuki.

“We’ve received separate orders,” he explained. “We’ll stay together until the SDF arrives, but we can’t go with you to the hospital.”

Frustrated that he wouldn’t be able to help the last of the patients evacuate, the officer couldn’t hold back his tears. 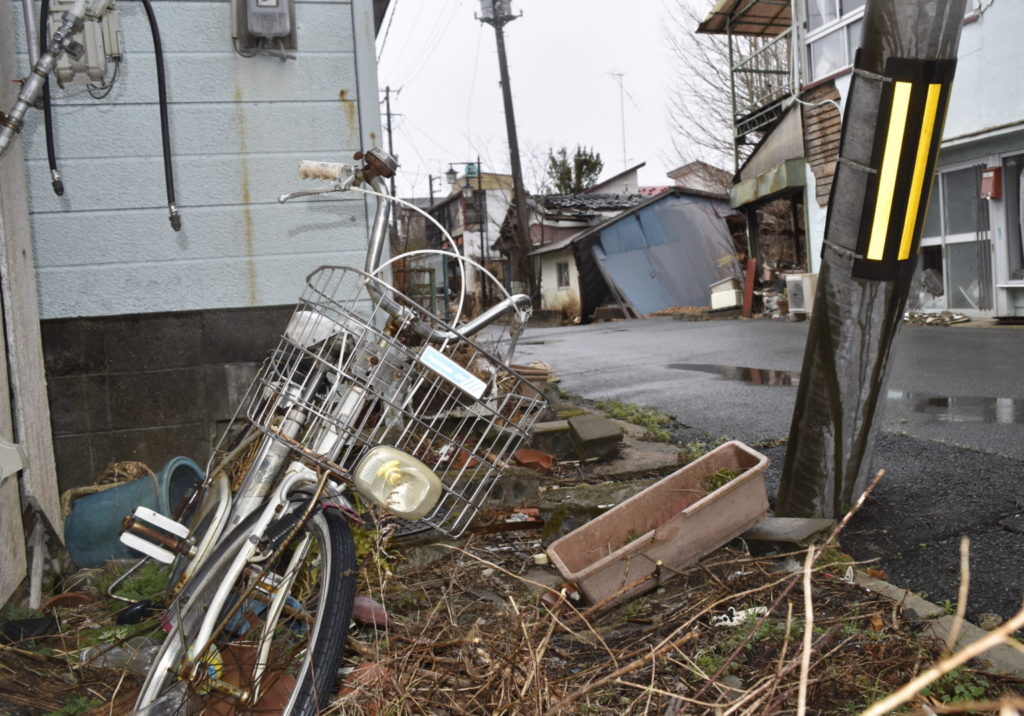 A telephone pole and house in Okuma town tilted by the earthquake. Photo taken on March 2, 2021 by Makoto Watanabe. (C) Tansa

At 9 a.m., Nitta and the others arrived at the Kawauchi town hall, where they waited on standby on its first floor. There was still no sign of the SDF, although it had been two hours since the rescue unit supposedly departed Camp Koriyama.

Later that morning, Nitta received word that the SDF had already arrived at Futaba Hospital and were in the process of evacuating the patients.

“It seems they’ve already begun the rescue,” he informed Suzuki. “We’ll just have to leave it to them.”

Although Suzuki felt he should have been there to communicate with the SDF, he was relieved that the remaining patients were being evacuated.

His peace of mind didn’t last. Around 1 p.m., Suzuki heard that the previously evacuated patients were currently being housed at Iwaki Kaisei Hospital and in the Iwaki Koyo High School gym.

“But the patients evacuated on March 14 were mostly bedridden and in serious condition,” Suzuki said, alarmed. “Why were they taken to a school gym? I just can’t understand it. They could die without proper medical care.”

Suzuki went to find Nitta, who was still at the town hall.

“Please take me to the hospital in Iwaki where the other patients are.”

But Nitta had his hands full assisting the evacuation and confirming the safety of other residents. He couldn’t drive Suzuki the 55 kilometers to Iwaki city.

Searching for someone who could help, Suzuki managed to locate an acquaintance in the town hall and borrow their car. He returned once more to Nitta.

“We managed to find a car, so we’re going to Iwaki city. Thank you for everything.”

The hospital staff parted ways in Iwaki. Suzuki went to Iwaki Kaisei Hospital, arriving at 3 p.m. He found the Futaba Hospital patients lying on futon that blanketed the floor of the hospital rooms and hallways. Iwaki Kaisei was far beyond capacity. Suzuki saw 20 patients sardined into a room that couldn’t fit more than six beds.

He phoned various hospitals, asking if they could take some of the patients. When the answer was yes, he wrote explanations of their conditions and other relevant information for the receiving hospitals.

Hard pressed to look after even just the patients at Iwaki Kaisei Hospital, Suzuki had no time to go to Iwaki Koyo High School as well.

But without medical equipment, the situation at the school was even more dire. Six patients had died on the nearly 10-hour, 230-kilometer journey by bus from Futaba Hospital on March 14.

By March 16, another eight had passed away at the school.

And, unbeknown to Suzuki, the evacuation of the remaining patients at Futaba Hospital wasn’t going to plan either.

(Originally published in Japanese on March 16, 2021. Translation by Annelise Giseburt.)