We are honored to receive the FCCJ Supporter of the Freed Press Award. Our acceptance speeches are provided below.

Reasons for being selected for the award

The Foreign Correspondents Club’s Freedom of the Press Committee was pleased to honor Makoto Watanabe, Editor-In-Chief of the Waseda Chronicle [now Tansa] and Tatsuro Hanada, Director of the Institute for Journalism, with the 2017 Supporter of the Free Press Award. Now is a particularly sensitive time for press freedom in Japan: Reporters Without Borders recently issued a report that described a “growing self-censorship and a system of Kisha clubs [meaning] journalists have difficulty serving the public interest and fulfilling their role as democracy’s watchdogs” and UN Rapporteur David Kaye said government pressure on media “requires attention lest [it] undermine Japan’s democratic foundations.”

In this context, it is essential that Japan have an entity like the Waseda Institute for Journalism – and the Waseda Chronicle – that is committed to advancing the principles of a free and open press and training a new generation of journalists to operate outside the Keisha Club System. The Institute has shown a unique dedication to changing how journalism is practiced in Japan and is now working with foreign news organizations to explore best practices worldwide and bring those ideas to Japan. The committee was also impressed by how much the Institute and the Waseda Chronicle have been able to accomplish in just a short amount of time; The Chronicle’s series, “Journalism for Sale” was expansive and revelatory. We hope this is just the beginning for the Institute and that FCCJ’s Freedom of the Press Committee can help it succeed by calling attention to the excellent work it is doing.

We have been honored with 2017 FCCJ Freedom of Press Award, Supporter of the Free Press, but I have strong doubts as to whether we have actually contributed to supporting a free press. I say this because unlike in the case of the Moritomo issue, reported on by the Asahi Shimbun, our investigative reports on Dentsu and their pharmaceutical clients have received no coverage by the mainstream legacy media.

Receiving this award from the Foreign Correspondents’ Club of Japan(FCCJ)  is a great encouragement to us, and we are thrilled to feel that we finally have an ally in our work.

We can’t let ourselves become complacent, however—Japan does, in fact, have a free press. Except for very rare exceptions, journalists in Japan do not get arrested or killed. Nonetheless, the fact that these awards exist and that we were able to receive one to us is a sign of the sad state of journalism in Japan today—namely, a state in which press freedom is in dire need of support. The Waseda Chronicle has only just gotten off the ground, in terms of our financial base and in other respects, but we look forward to your continued support.

Tatsuro Hanada, Director of the Institute for Journalism, Waseda University

President Khaldon Azhari, and dear colleagues and friends! I would like to express to FCCJ my deepest gratitude for 2017 FCCJ Freedom of Press Award, Supporter of the Free Press.

FCCJ recognition of the work of the Waseda Chronicle and the Institute for Journalism at Waseda University has special value for me. Our university-based, nonprofit newsroom is struggling in the Galapagos-like landscape of media and journalism in this country, but we are looking forward to joining the global movement of investigative journalism.

The Chronicle is currently running alone on a track without any other Japanese media organization or journalist, but this award shows us that we are not alone and that our work is being watched carefully and appreciated by foreign correspondents in Japan. We are encouraged too by the support of donations and encouraging messages from Japanese citizens.

Today, coincidentally, is September 11. In addition to being the anniversary of the attacks in the USA 16 years ago, the date is bitter and auspicious here too. Three years ago today, the president of the Asahi Shimbun, Tadakazu Kimura, retracted a major investigative story about the Fukushima Dai-ichi nuclear plant under pressure from conservative forces. Kimura apologized and the journalists responsible for the story were punished. Three months later in this room of FCCJ, I gave a joint press conference to protest that retraction (FYI: YouTube). The birth of Waseda Chronicle is a consequence of that suppression of investigative journalists, who subsequently left the Asahi.

Our project promoting watchdog journalism is also a response in kind to this year’s Japan report on the promotion and protection of the right to freedom of opinion and expression by the Special Rapporteur of the Human Rights Council of UN, Professor David Kaye. In the report, Kaye strongly recommended Japanese journalists to promote independent reporting.

Our journey of journalistic innovation has just begun. I am sure that this journey will be hard, but the Waseda Chronicle is proud to stand on the common ground of international corroborations with the journalist community. The Chronicle will never give up. Thank you very much!

Tatsuro HANADA, 2015, ”Power and journalism in “Jipang”: From Galapagos to Rhodes” 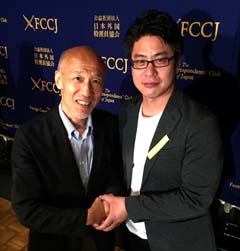 Next article
All announcements