Competitors pounced on the floundering Asahi

On Aug. 5, 2014, The Asahi Shimbun published an article announcing the results of an inspection into its past comfort women coverage. This was about a month before the paper would retract its article on Fukushima No. 1 plant manager Masao Yoshida’s account of the 2011 nuclear accident.

In the announcement, the Asahi acknowledged that, beginning in 1982, 16 of its articles about comfort women had been based on false statements made by the late Seiji Yoshida. Yoshida, who claimed to have worked for a labor recruitment organization in Yamaguchi Prefecture, had lied about “hunting down 200 young Korean women on South Korea’s Jeju Island.” The Asahi retracted all 16 articles based on his false statements.

But the retractions came without an apology. Management worried that if the paper apologized, readers might question the veracity of its other articles on the subject or even get the mistaken impression that there had been no comfort women at all. For details, please read this series’ previous article. The lack of an apology opened the Asahi to criticism from readers and other media, which grew into a bashing of the paper’s comfort women coverage overall.

Put simply, the criticism against the paper had reached a fever pitch in the period before the Fukushima article was retracted.

The Asahi was floundering — but other papers saw a business opportunity. 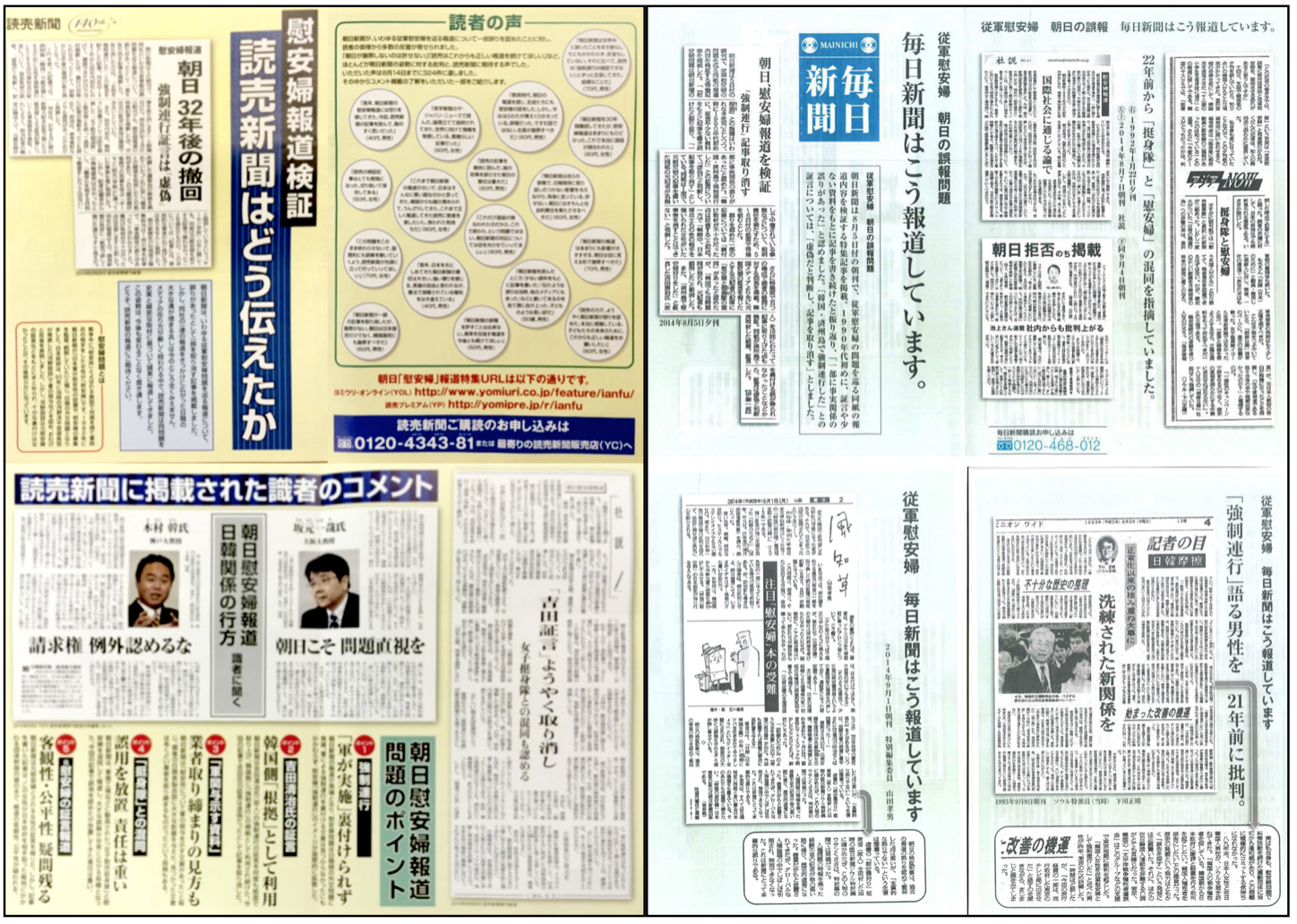 Flyers from Yomiuri Shimbun and Mainichi Shimbun. Both have contact information for those wishing to take out subscriptions.

I have two flyers, from the Mainichi Shimbun and the Yomiuri Shimbun, promoting the papers to potential subscribers.

The Mainichi’s flyer, titled “Comfort women coverage: The Asahi’s false articles — here’s how the Mainichi reported,” boasted of the paper’s accurate coverage. For example, it introduced a 1993 article written by a correspondent in Seoul with the heading “21 years ago, the Mainichi criticized the man who claimed comfort women were forcibly recruited.” Curious, I read the full article. Only 109 of the piece’s 2,187 characters dealt with Yoshida. The reporter simply wrote, “I couldn’t help staring at his face” — not quite the criticism the heading proclaimed.

The Yomiuri flyer was titled, “How the Yomiuri reported on the Asahi’s comfort women coverage verification.” It included an editorial, headlined “False Yoshida statements finally retracted,” and reader comments, such as “The Asahi is seriously responsible for discrediting Japan for many years.”

Both flyers had toll-free numbers for those wishing to take out subscriptions.

A young aspiring journalist gave one of my colleagues the Mainichi flyer during the height of the Asahi bashing.

“Shouldn’t papers be ashamed to attack each other like this — just to boost their sales?” they said angrily as they showed the flyer to my colleague. They had found it stuffed in their mailbox.

About two months after the Asahi announced the results of its coverage inspection, on Oct. 15, 2014, the Japan Newspaper Publishers & Editors Association held its 67th annual conference in Niigata. At the conference, the Mainichi and Yomiuri heads admitted to having “overdone it” with their sales campaigns.

Mainichi President Yutaka Asahina proposed a resolution at the conference stressing the “importance of decency” and how it should apply to newspapers’ promotional campaigns. Yomiuri Group President Kojiro Shiraishi said, “I would like to apologize if some of the Yomiuri’s sales outlets caused trouble after the Asahi issued its correction.”